Dame Alice Kyteler was born in 1263 to a wealthy merchant family. Alice was an only child and enjoyed a privileged upbringing, demonstrating early on that she had inherited her father’s business sense. Indeed, she became a formidable businesswoman in her own right, and – given this was pre-equality – it would be fair to say that those surrounding her would have been intimidated.

Whether or not she was guilty of the crimes she was later accused of, Alice’s wealth and status were already inspiring much neighbourhood jealousy and malicious gossip.

Alice made a decent living as a money lender. She married William Outlaw – himself a wealthy merchant & moneylender – in 1280. She later opened what is now known as Kyteler’s Inn shortly after the birth of her son – who was also named William. She was later widowed and she remarried.

In 1302, Kyteler and her second husband, Adam le Blund – another wealthy moneylender, were suspected of killing her first husband. Nothing came of those suspicions. However, when le Blund died suddenly, having transferred much of his worldly wealth to Alice’s son, despite having children of his own from a previous marriage, suspicions were aroused once more.

By 1309, Alice had again remarried. This time she was betrothed to a wealthy landowner called Richard de Valle. A few years later, he too passed away under mysterious circumstances. This time, she successfully sued her stepson for a dower – a sum of money that was agreed prior to their marriage, essentially a prenup.

Her stepchildren were now very suspicious of Kyteler’s ever-increasing wealth, coupled with what appeared to be a very unfortunate string of bad luck with three husbands now deceased. But when her fourth husband, John le Poer, fell ill in 1324, and his children became suspicious, this time, action was taken.

Their father was preparing to change his will in Alice’s favour, but they managed to convince him that he was being poisoned. One story tells that John searched for evidence of his wife’s alleged alchemy and that he found several mysterious items which he then presented to the Bishop of Ossory, Richard Ledrede. Whether this element is true or not, he did express concern before his death that he had indeed been poisoned and the children accused Alice of attempted murder and of consorting with devils. Soon after, Bishop Ledrede formally accused Alice, her son, and her associates of witchcraft and heresy.

Ledrede wrote to Roger Outlaw, Chancellor of Ireland, demanding her arrest using a papal decree. But the Chancellor was Kyteler’s brother-in-law and one of a few friends Kyteler had in high places. The chancellor refused the bishop’s demand stating that a public prosecution would be required, that the alleged witches would need to be ex-communicated and forty days would then need to pass before they could proceed.

Bishop Ledrede summoned Alice Kyteler to appear before him, but she had already fled to Dublin and was seeking protection and advice from her powerful consorts there. In her absence, the bishop excommunicated her and in line with the Chancellor’s ruling, set a date for her son William to appear and answer to charges of heresy and the protection of heretics. However, William Outlaw Junior also had friends in high places – and one of them was seneschal Arnold Ie Poer. Ledrede was urged to drop the case and when he refused, he himself was imprisoned and questioned for 17 days.

On his release, Ledrede continued in his attempts to have Kyteler arrested but he continued to face resistance and outright hostility from Ie Poer. Alice Kyteler had also made approaches to the authorities in Dublin, accusing Ledrede of defamation of her character and of excommunicating her without a summons. Ledrede was summoned to appear at the court in Dublin but was initially reluctant to attend as he feared his passage from Kilkenny would not be safe given Kyteler’s powerful connections. What ensued was essentially a battle between the church and the state and given the power of the church at that time, it soon became evident that, despite her powerful connections, time was running out for Alice and her accomplices. When the bishop returned from Dublin, he demanded that they be arrested.

Now interred at Kilkenny Castle, Alice’s 24-year-old maid, Petronilla de Meath, succumbed to interrogation under torture and confessed that she and Kyteler were indeed guilty of six out of the seven charges brought against them. It is possible that Petronilla’s spirit had been broken at this point and that she just said what she thought her accusers wanted to hear. Aside from stating that she and Alice could fly and that her mistress had engaged in sexual acts with a demon, Petronilla said that she had – at Alice’s instigation:

sacrificed in three places to devils, in each of which places she had sacrificed three cocks at cross-roads without the city to a certain demon who called himself Robert, one of the inferior order from Hell, by shedding their blood and tearing them limb from limb, from the intestines of which, with spiders and black worms like scorpions with a certain plant called millefoil and other plants and disgusting worms along with the brain and the swaddling bands of a child dead without baptism, she, in the skull of a certain thief who had been beheaded, and on the instruction of the said Alice, made many confections, ointments, and powders for afflicting the bodies of the faithful, and for producing love and hatred and for making the faces of certain women on the use of certain incantations appear to certain persons to be horned like goats.

The accusations made against Alice and her associates were:

The fate of Alice would have been sealed if it were not for one final helping hand from her brother-in-law, Roger Outlaw. The dungeon guards were heavily beaten, allowing Alice to escape and flee to England.

Alice was found guilty in absentia and her assets were seized. But Petronilla was flogged and burned at the stake outside the Tholsel in Kilkenny City Centre on the 3rd of November 1324. Alice’s son, William, was given a penance. He was ordered to attend three Masses every day, to give some of his money to the poor, and to repair the roof of St Canice’s Cathedral.

Alice’s former home, Kyteler’s Inn is now a popular bar and restaurant. An unidentified female is said to haunt the venue. Staff at Kyteler’s Inn have claimed that a presence is often felt in the bar and that a black shadow was captured in a photo. Some believe it is her maid, Petronilla, that haunts the pub. It is believed that Alice herself haunts a staircase at St Canice’s Cathedral but following her exile, nobody really knows what became of her or indeed whether it is really her.

Please note that Spirited Isle is not responsible for the content of third party websites.

Users should always undertake their own checks before traveling to Kyteler’s Inn or any other location listed on this website, to ensure that it will be open and accessible.

If you have visited Kyteler’s Inn, why not tell other users how you got on? Would you recommend it? Did you see, hear or feel anything? Click “Add Your Experience” and then enter your name and email address to post your guest review.

Please note that all experiences will be vetted prior to publishing and I reserve the right to decline inclusion or to redact sensitive information.

Showing 1 - 1 of 1
OK spot for a pint
3.0
Guest
·
May 16, 2021
I was in Kilkenny and called in for a quick pint before the pandemic. It's a nice enough spot but it feels just like any other old world bar. Staff polite but not overly friendly. 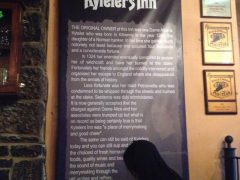 Spirited Isle accepts no responsibility for action taken by any user having consulted information published on this website or elsewhere. Furthermore, the owner of the website is not responsible for any loss, damage, injury, demonic possession, death, or other negative outcome arising..

Be safe, be responsible and be respectful.

We use cookies on our website to give you the most relevant experience by remembering your preferences and repeat visits. By clicking “Accept”, you consent to the use of ALL the cookies.
Cookie settingsACCEPT
Manage consent

This website uses cookies to improve your experience while you navigate through the website. Out of these, the cookies that are categorized as necessary are stored on your browser as they are essential for the working of basic functionalities of the website. We also use third-party cookies that help us analyze and understand how you use this website. These cookies will be stored in your browser only with your consent. You also have the option to opt-out of these cookies. But opting out of some of these cookies may affect your browsing experience.
Necessary Always Enabled
Necessary cookies are absolutely essential for the website to function properly. These cookies ensure basic functionalities and security features of the website, anonymously.
Functional
Functional cookies help to perform certain functionalities like sharing the content of the website on social media platforms, collect feedbacks, and other third-party features.
Performance
Performance cookies are used to understand and analyze the key performance indexes of the website which helps in delivering a better user experience for the visitors.
Analytics
Analytical cookies are used to understand how visitors interact with the website. These cookies help provide information on metrics the number of visitors, bounce rate, traffic source, etc.
Advertisement
Advertisement cookies are used to provide visitors with relevant ads and marketing campaigns. These cookies track visitors across websites and collect information to provide customized ads.
Others
Other uncategorized cookies are those that are being analyzed and have not been classified into a category as yet.
SAVE & ACCEPT